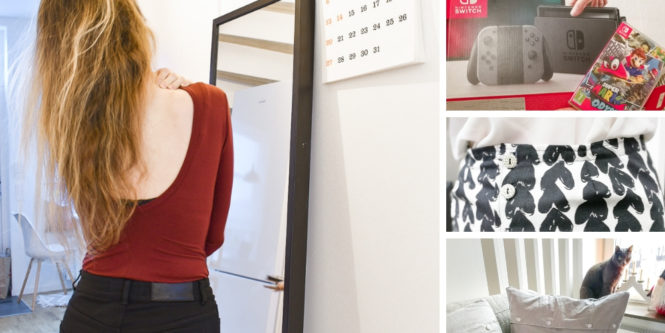 Er … the instant plume of December at … the end of January? Well, yes, I admit we are a little … late! Normally it is rather in the beginning / middle of next month that we talk about the good things of the previous one. Sorry … let’s say that the month of January was a little challenging at different levels, whether regarding health or work. So it took me some time being “on top of things” as people say! So, what do you say we don’t waste any more time ? Let’s start!

Psst … For those of you who don’t know what the heck we are talking about here… the concept of the Instant Plume is rather simple (see all articles here). It’s a little happiness concept that started from a hashtag created on instagram, #instantplume. The goal is to share our little moments of happiness we have in our everyday life and that make us smile, simply. Do you sometimes get amazed like a child for the simplest things? If the answer to this question is yes, then you’re made to be part of our community! Today this hashtag gathers more than 3000 posts on instagram: so many good vibes!

Do not hesitate to join our little squad of happy people on instagram by inserting the hashtag #instantplume under your happy posts.

The little things of December

1. In December, I started sewing

It had been a long time since I wanted to buy a sewing machine. But because of lack of time, I had not taken the step yet.

Sewing for me has a special meaning since my creative mother gave birth to me as a couturière and designer, and lived out of this profession until me being like 18 or 19 years old.

Then she moved on to another form of art (painting, sculpture, jewelry creation) but I still grew up in threads, pieces of cloth, Singer machine noises and buttons … I even played with her buttons and made families with them, etc!

So now I’m so happy to follow my mother’s footsteps and to learn sewing. I have to learn a lot before becoming as talented as mom, but I can tell you that I love it already!

And so here are my first little creations, far from perfect but still happy with the result! 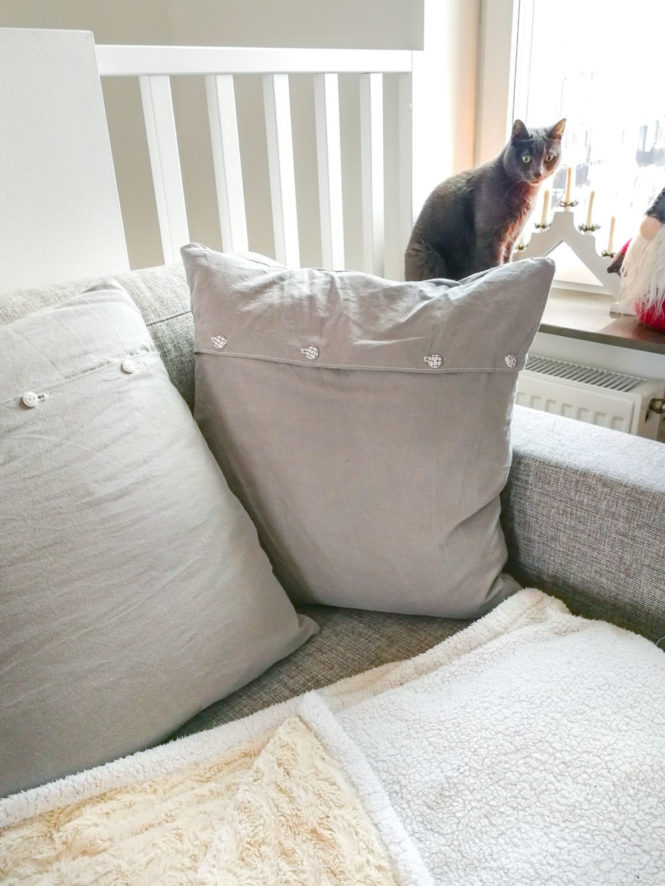 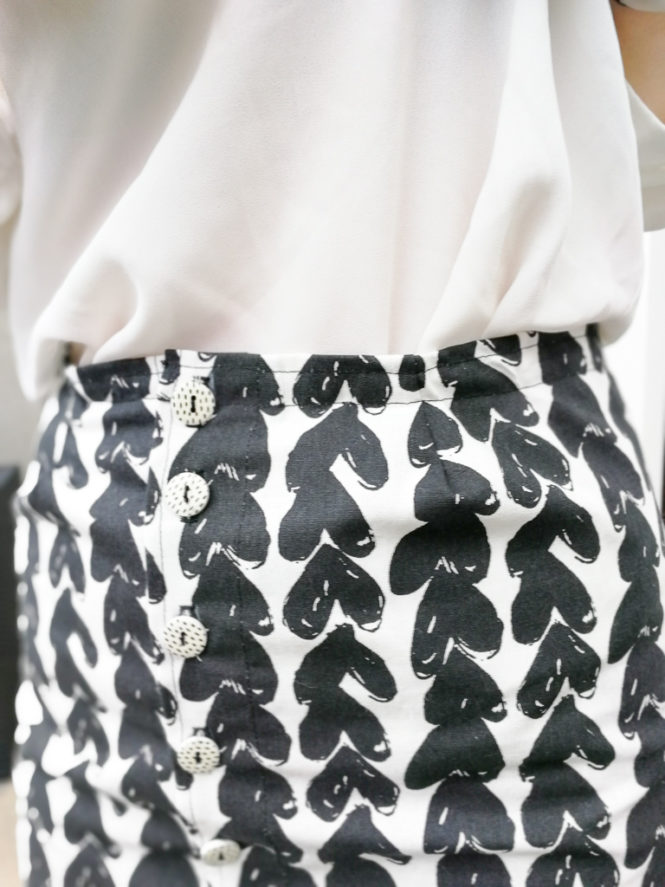 2 cotton pillowcases, made out of fabric recovered from an old bed sheet, and painted wooden buttons bought for 1 euro 50 at Sostrene Grenes! And the second, this little love skirt made without a pattern and inspired by skirts that I already had, and especially after a lot of trying on me with pins. I found this pretty printed fabric in a haberdashery (super cheap!) and the buttons also come from Sostrene Grenes. Rather happy for a first skirt, do you like it?

Who loves sewing around here?

2. In December I started acupuncture

I’ve been talking to you for a while about the fact that since I stopped my pill I have had hormonal concerns including acne problems (among others … because that’s not all. I had other health concerns also related to this hormonal imbalance and the shock that it has been for my body to be deprived of its “artificial dose of hormones” after more than 15 years of pill). So I tried a lot of things, products, etc. to get to grips with it and I’m talking about it here in my beauty routine against hormonal acne. But that is obviously not enough. I went to see a dermatologist and the solutions he offered me do not suit me. So I decided to turn myself towards Chinese medicine and acupuncture that seems to be a good solution for rebalancing the body at many levels, according to studies. I am right in the middle of my treatment against stress (and acne) with acupuncture and I am keeping track of my impressions after each session so I can talk about it in more detail in a future article.

3. In December I got a Nintendo Switch

When I was little I played a lot of video games. I had the legendary Nintendo 64 with its Mario games, which entertained for years my best friends, my family and I. I also had some Game Boy, including the Game Boy Color with the game Pokemon which was so fun too! But it’s true that after I turned 15, I stopped playing all this because I started to grow up and had other priorities (weekends with friends, parties, boys, and all that … haha ​​basic teenager priorities).

It so happens that my boyfriend still plays video games. In fact he is a little nerd, and since I am with him I rediscover the joys of video games. So I played quite a lot with his PS4 in 2018 but I kept saying that Nintendo, with all its Mario games, was much better and so on. And for Christmas, I had the great surprise of unwrapping a Nintendo Switch, with the game Super Mario Odyssey from under the Christmas tree! I have the best boyfriend in the world! And WOW, it is SO FUN … I love it, it’s really funny. Nintendo games are really well done … whether your 7 or 77! 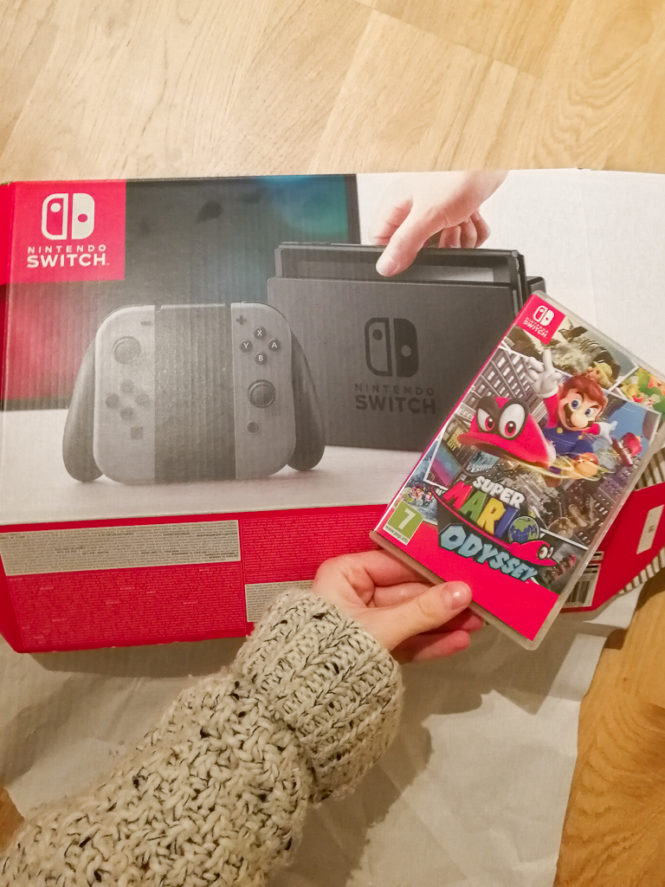 Do you also like Mario games or other games in general?

We ended the year 2018 in style with all your nice posts! I could never thank you enough for your contribution to this little happiness concept that without you would not have the same impact, you really ARE the best! I invite you to check the hashtag #instantplume to make nice discoveries on instagram, because there are plenty of beautiful people, beautiful accounts and beautiful pictures to discover. Why not even follow the hashtag? Nothing better to see all the posts of our little community of people who enjoy simple pleasures <3! 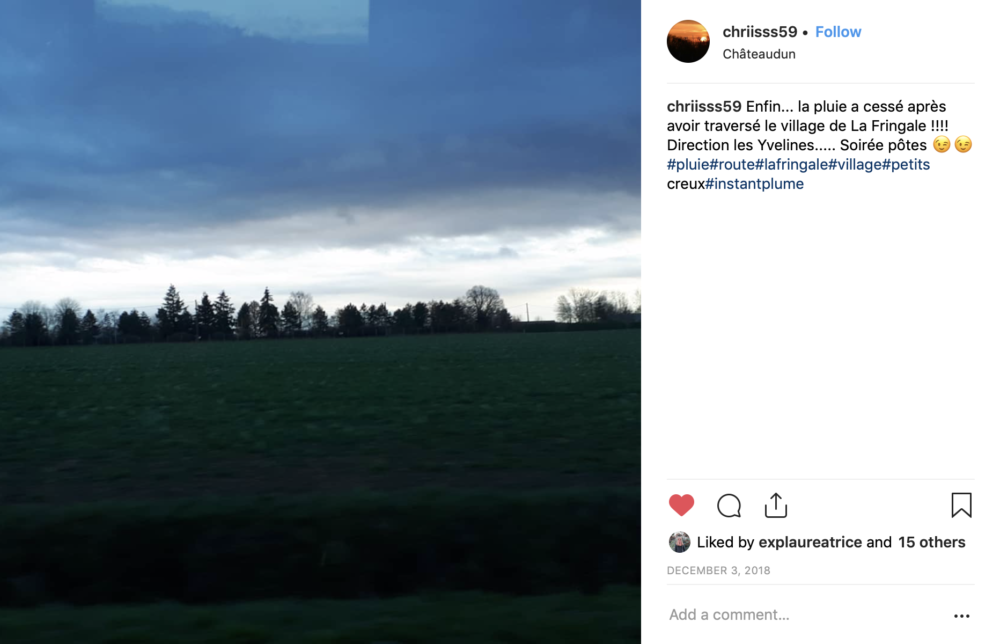 The happiness of contemplating a beautiful horizon … 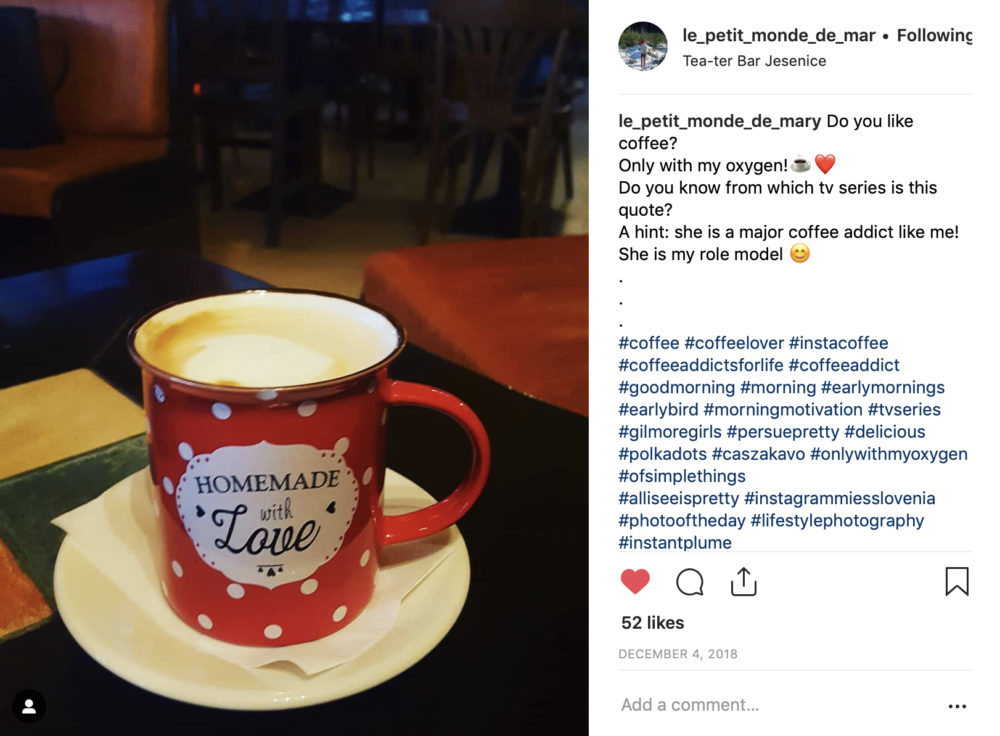 These little things at home that give us the smile … 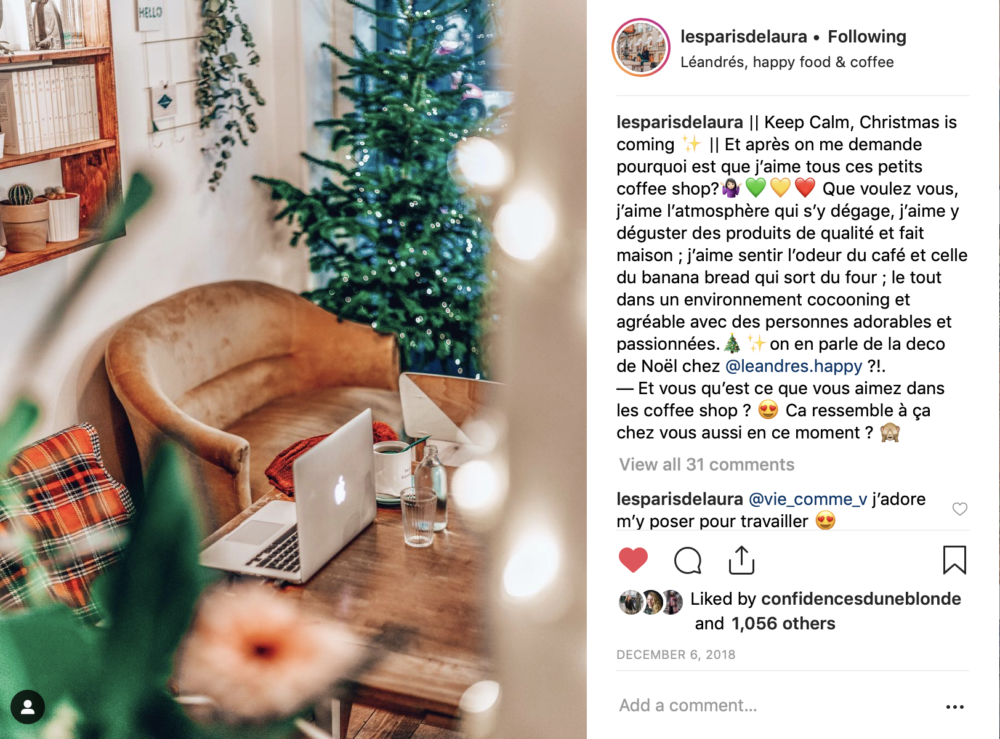 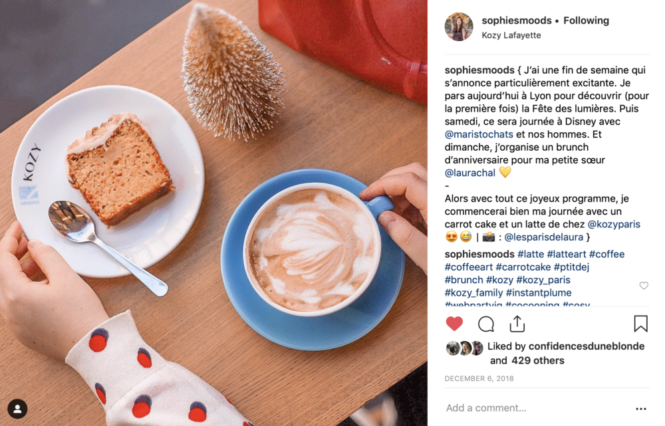 A little sweet break in the day, always welcomed <3 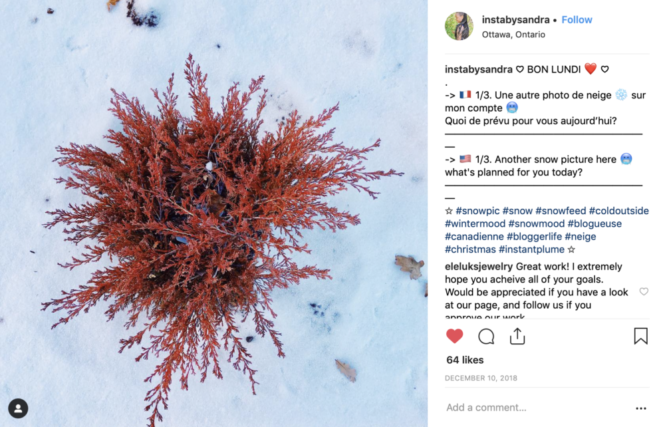 The beautiful colored contrasts that the snow offers us …

I could not say better <3 Our smile, a precious good that nothing and no one should be able to take away from us …. 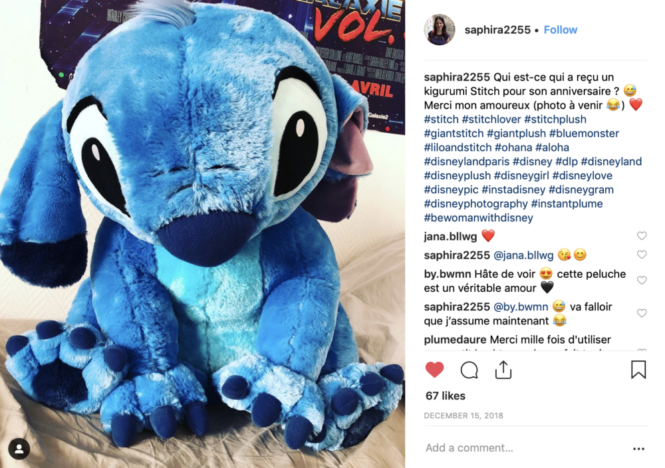 Falling back to sweet childhood whenever possible ^^

Have a lovely month of January ! Let’s meet soon on the blog to talk about it !

* What were your #instantplume of December? *